FR8yard and its open air concept coming to Spartanburg 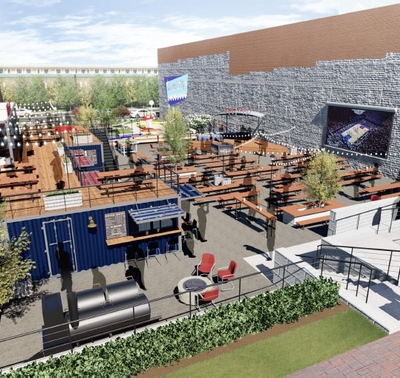 What will Spartanburg, Dallas and Chicago soon have in common? An entirely outdoor restaurant.

FR8yard will be the first of its kind not just in the Upstate, but in the Carolinas. The budding concept — part beer garden, part family tailgate — garners a near cult-like following at similar establishments such as Truck Yard in Dallas and the backyard of Parson’s Chicken and Fish in Chicago.

The location, at 125 East Main St., is central to Spartanburg’s downtown district and the only open lot sitting between two multi-story buildings on Main Street. The property, owned by the Johnson family, will be developed with Hub City Hospitality, known for their modern cantina concept Willy Taco.

But is it a bar, an eatery or a venue? The answer is yes. Hybrid concepts are a winning combination in the hospitality sector of late and FR8yard describes itself as such: a family friendly, dog friendly outdoor entertainment and restaurant complex, according to Bill Burton, principal of Hub City Hospitality.

Financially invested as a partner in the endeavor, Geordy Johnson says the Johnson family believes strongly in the FR8yard concept and “the positive impact it could have on downtown as a destination, especially to activate greater pedestrian traffic on Main Street.”

Plans for the 12,000-square-foot development include seating for 225, as well as shipping container construction for a kitchen, bar and restroom facilities. Other than some unique shade structures, FR8yard plans to be out in the open with installed yard games, fire pits and an acoustic stage for live music. Richard Heatly of Hub City Hospitality calls the project “a destination for friends and family to socialize at the center of a southern town experiencing what could only be called one heck of a renaissance.”

Central to the design is a large-scale projection screen for viewing sporting events and movies with plans to broadcast sound. At full occupancy, FR8yard could accommodate 350 patrons to watch college football and basketball games, premier sporting events such as The Kentucky Derby and the World Cup, or unique entertainment programming like the Academy Awards.

The group has been amassing vintage patio furniture for the site and has dibs on 40 original beer garden tables from Bavaria.

“We want everything about FR8yard to feel authentic, for it to have a sense of place,” says Heatly.

The menu will be snack-centric, featuring items such as char-grilled chicken wings and brown paper bags filled with baked, soft pretzel bites. Chef William Cribb will direct the kitchen and help to evolve menu items based on demand and seasonality. Cribb was recently named the 2017 State of South Carolina Chef Ambassador of the Upstate.

“We’re all thinking of FR8yard in terms of beer garden bar food,” explains Heatly. “Pub food mixed with the great southern staples. We’re not planning to reinvent the wheel, but hope to offer in combination items that feels uniquely Upstate.”

Beer options will be a mix of domestic craft beer with some German offerings, but all by draft or can. The site will have a no glass policy in keeping with its urban footprint. In fact, plans show very little concrete for the site other than foundations for structures and what it needs to comply with ADA regulation.

“An outdoor restaurant offers a kind of flexibility you often don’t get inside four walls,” says William Grey of McMillan Pazdan Smith, who is the architect of record for FR8yard. “It was an opportunity to use somewhat permeable materials, to ultimately have a low impact on the site but still let it be accessible for everyone.”

The team hopes to employ a combination of crushed stone and landscaping techniques to keep spaces well-drained but soft underfoot whenever possible. Trees and planter boxes are in the works too and grass for kids and dogs. Four to five shipping containers will be gutted to create main level structures as well as a rooftop patio.

Unlike a traditional restaurant, FR8yard will have no hostess stand and no designated tables. These “backyard” or “garden” concepts (as they are loosely being called) are big on patrons moving about in keeping with a park-like or college tailgate feel. Floating servers will assist guests, especially with drinks during high-volume periods, but in general the concept calls for quick service ordering at designated counter spaces with numbered pick up.

“It’s a true common gathering area free for all,” says Heatly, “for people that want to hang out.”

“FR8yard is a great name that gives a nod to Spartanburg’s history as a major railroad hub. But, what will make FR8yard successful will be the energy, the vibe, generated in an open air gathering spot that will have high quality food, beverage and recreation components for all ages. That’s our vision.”