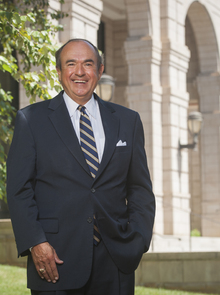 Carlos Evans serves on the Board of Johnson Management. With an extensive expertise in finance, capital markets and strategic transactions, Carlos offers valuable guidance to the Johnson Management team. Carlos retired from Wells Fargo Bank in May 2014, where he served as executive vice president and group head of the eastern division of Wells Fargo commercial banking. Carlos was also responsible for the bank’s government and institutional banking group and served on Wells Fargo’s management committee. Carlos joined First Union National Bank in 2000 as the wholesale banking executive for the commercial segment prior to its merger with Wachovia Corporation in 2001. From 2006 until Wachovia’s merger with Wells Fargo in 2009, Carlos was the wholesale banking executive and an executive vice president for the Wachovia general banking group. Before joining First Union, Carlos served in a variety of roles at Bank of America and its predecessors including NationsBank, North Carolina National Bank and Bankers Trust of South Carolina, which he joined in 1973. Carlos received his B.A. in economics from Newberry College. He is also a graduate of the Commercial Lending School in Oklahoma and the Colgate Darden Commercial Lending School at the University of Virginia. Mr. Evans is chairman of the board of Highwoods Properties (NYSE: HIW), chairman emeritus of the board of the Spoleto Festival USA and past chairman of the board of the Medical University of South Carolina Foundation. He is also on the board of Queens University of Charlotte. Carlos also serves on the Boards of SYKES Enterprises (NASDAQ: SYKE), National Coating and Supplies, Warren Oil Company, and American Welding Supply, along with a fund board, Goldman Sachs Middle Market BDC.