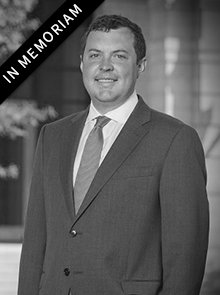 William Spry passed away on August 22, 2019. The team members, partners, families and friends of Johnson Development Associates will forever mourn the loss of William and his leadership, generosity, intelligence, modesty and friendship.

William Spry served as Chief Operating Officer and President of the Self-Storage Division of JDA.  In his role as Chief Operating Officer, William was responsible for the operations and administration of the company, and as President of the Self-Storage Division, he provided leadership of all storage development efforts across the country.  Prior to this role, William also served as Chief Financial Officer of JDA.  William joined JDA in 2016 as a Real Estate Manager in the Industrial division, where he focused on sourcing, development, investment management and leasing of JDA’s industrial projects in North Carolina and Virginia. Before joining JDA, William worked in investment banking for Bank of America Merrill Lynch in the Financial Sponsors group. Prior to working at Bank of America, William received his JD and MBA from the University of North Carolina at Chapel Hill. He began his career in real estate development working for The Pence Group, a Washington, D.C.-based commercial developer. William also received a B.A. in History from Yale University.