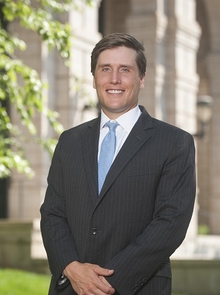 Rob Rain is the President of the Industrial Division of JDA. He is responsible for the sourcing, development, and management of JDA’s industrial projects. Prior to joining JDA, he worked in Private Equity at WJ Partners in Spartanburg, SC, where he served as an Operating Manager for portfolio companies, and at EnCap Investments in Houston, TX, where he worked on the Upstream Investment Staff. Rob also spent four years as an infantry officer in the United States Marine Corps. He led infantry units in Iraq and Afghanistan and received a Bronze Star with Valor for actions in multiple enemy engagements in Afghanistan. After completing his time in the military, Rob received a Master of Business Administration from the Harvard Business School. He also holds a Bachelor of Arts from Washington and Lee University where he graduated Magna Cum Laude.

Rob serves on the Spartanburg City Council. He also teaches Sunday school and is actively involved at Westminster Presbyterian Church.